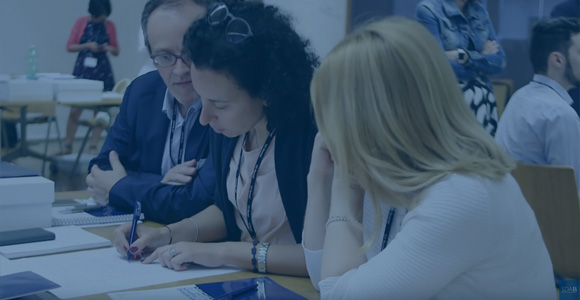 Change works in mysterious ways. But there was nothing mysterious about what the multinational pharmaceutical company Boehringer Ingelheim (BI) accomplished in collaboration with SDA Bocconi: their path was well marked, punctuated by all the steps needed to reach the goal within a limited amount of time, with an effective and closely-knit team, and very good results. This road has a specific name: Innohack, the methodology refined by SDA Bocconi to produce innovative ideas in a short time, not limited to just the creative side, but making sure to leave room for validation and actual applicability of the ideas.

The journey began from the need to tackle chronic illness management in an innovative way, as it is one of the most critical points in the public healthcare and social assistance system. It’s a growing trend, mainly for two reasons: the population is ageing, and medical research and treatments have evolved, “stabilizing” illnesses that used to develop quickly and often had fatal outcomes. The sample of illnesses that were analyzed included cardiovascular problems, asthma, diabetes, and obstructive pulmonary disease.

“Living” with these illnesses is not just about the patients, but also about several other categories of people (doctors, relatives, care-givers, etc.), and it creates networks of complex and delicate relationships. The real challenge is to not only take on the clinical aspect, but also – and maybe more importantly – the human, relational, and organizational ones. To do so we need not just specialists, but, precisely, people. Innohack’s logic starts exactly from here: those sitting around a table come from different backgrounds, have different stories and training, and can analyze the problem from many points of view, often unexpected ones. Judging from the work groups that formed – made of insurance agents, psychologists, nutritionists, students, public servants, representatives from patient and pharmacy associations, managers and even artists – it couldn’t have been any other way.

The project involved over 40 participants divided into 7 groups, who generated a large quantity of ideas lead by SDA Bocconi faculty, Mikkel Draebye and Antonio Catalani, and supported by BI managers and healthcare professionals. Through several stages of discussions and fine-tuning, they identified the 7 best projects (one per group) to undergo a trial phase. The common characteristic among the selected projects was their new perspective – the first result expected of Innohack’s creative process – on the problem of chronicity: it’s not enough to deal with the clinical aspects of the illness, as what’s needed is to take on the person as a whole, immersed in their daily life.

The next step was to field test the idea. Innohack in fact calls for the execution of the experimental project as an essential stage to test its soundness and replicability. Real-life testing revealed the one winning project: it’s called “Diabetes Reality Contest” and it puts forth an original way to tackle the difficulties of those who suffer from diabetes and the different aspects of their daily life; it’s a kind of competition, similar to the “MasterChef” format, that follows the typical life of a group of diabetic patients and the problems they grapple with. The objective is to “win” with the best strategies to undertake treatment and improve their quality of life.

Even though it’s still in its experimental phase, the project has shown a great potential for impact, gaining a high level of acceptance: of all the patients that were interviewed, more than 80% would certainly follow the winning program, and half of them would actually be “contestants” themselves. This project is now part of Boehringer Ingelheim’s real innovation assets, and they will implement it on a larger scale.

Back to Success stories