Vision and responsibility, the forces of change for the public sector

Acting in the present while imagining the future. This is what the public sector must do if they want to change from a simple service dispenser to an engine for development. If they don’t want to limit themselves to handling the status quo, but be legitimized to govern a world that changes. Greta Nasi, – Director of Research for Government and SDA Professor of Public Management and Policy at the MPA - Master of Public Administration – is convinced of this. She explained how emergencies can turn into opportunities and how people can change the public administration from within.

How can the public sector manage the global challenges?
Mainly by learning how to interpret them with the right perspective, distancing themselves as much as possible from the temporal contingency and in some cases from the emergency point of view. I’m thinking for example about the migrants phenomenon, people who might become residents or citizens tomorrow. I’m also thinking about the technological challenge in a global arena with players of Google’s or Facebook’s caliber, companies with a turnover that exceeds the GDP of many developing countries. The first thing that the public sector must do is equip itself with the instruments to read such phenomena: not only “what’s going on?” but also “what is going to happen over the next 20 years?”. It’s a different approach from the traditional mentality of the public sector, who until not so long ago limited itself to supplying preset services and assess such services with purely quantitative parameters: I increased the number of places at the nursery school by 20% but I don’t worry whether my offer corresponds to the demand, or about the development of the demographic and social fabric of that area, or the needs of the new family units and so on. The public sector, to tell the truth, has already taken steps in this direction, but it always tends to “take a picture” of the situation, to read what is there. It still struggles to look ahead and beyond the borders of its local jurisdiction. Take Milan for example, certainly the most international city in Italy: if the government wants to grasp the opportunities tied to Brexit and become a beacon for foreign companies it must understand and set today the conditions for tomorrow’s development, thinking about the infrastructural requirements and all the services that companies and their employees will need and that are not there at present. We must have the ability to anticipate the needs that will arise, possibly not by “being subjected to” them but by setting the conditions from the get-go and defining long-term objectives, which means having a “vision” and understanding which direction to follow to make it come true. This is a necessary condition – maybe it won’t be enough but it is certainly necessary – to face the global challenges successfully.

What is the main driver of change in the public sector?
The issue here would have to extend to the relationship between politics and public administration: the former should map out the strategy, the latter apply it. The problem – admittedly not just an Italian one – is that often politics doesn’t deal with strategy, it works at a short range. But this issue would be too big to talk about.
To stick to the question, I think that the first factor for change is realizing that neither the public sector nor the private one (or the third sector) can successfully face the upcoming challenges on its own. The answer is thus: create a system. It’s about finding the incentives to create new opportunities of collaboration in synergy among the different sectors. The private sector clearly has profit in its DNA, the need to get financial results (also) in the short-term. The public sector does not have this constraint, economic performance is not among its objectives. How can they communicate? By finding common objectives, while at the same time each continues to do its own job and pursue different goals. Both are interested in having an attractive social, urban and environmental context, for example, and both can be called upon to make that happen, each in its own role. A symbolic example of such a strategic alliance between the public and private sector is Barcelona: for every euro the public administration spent to create a smart city – a digital innovation applied to different public services, from parking to garbage collection – the private sector supplied 53. And this wasn’t done as a partnership where the private had an immediate economic return (for example a rental fee), but rather because they shared a general strategic objective: making the city more captivating for individuals an organizations, attracting both a qualified work force and big international companies. With obvious long-term benefits for both players.

Has the concept of sustainable development changed from the public administrator’s point of view?
This question makes me think about the answers my students give me when I ask them where they would like to work and live. The most desirable locations are almost always large trend-setting cities, which are often not capitals: Barcelona is one example, but I also think about New York in North America, or Shanghai in China. Or Milan in Italy. What I mean is that more and more we identify places where “things happen” and they are highly urbanized centers with a great cultural and financial concentration. Sustainable development must start from there. The public administration in those cities must have the possibility and the ability to make autonomous choices, in harmony with but not subordinate to those of the central government. They must be able to act at a different level so as to be able to manage big challenges. And, I repeat, they must look to the future, know where they want to go, not chase happenings and emergencies. Nowadays this is mostly what sustainable development is for the public sector.

What are the managerial skills needed in the public sector to push and manage these transformations?
First of all they must be strongly result-oriented, something that is clear in the Barcelona example but that we still lack, because our public administration traditionally follows a legal model, and careers are marked more by formal requirements (job title, seniority) than substance (individual aptitude and skills). The predominant criteria for action is still adherence to the rules and regulations, and the managerial instruments introduced by the most recent reforms are often left unused because people lack the appropriate training.
They also need strong accountability – the will and the ability to take on responsibilities – and a vision of the whole: if you are in charge of an office and a sector you can’t forget that you are part of a bigger system, which has within itself necessary (and appropriate) interconnections. For this purpose it is also necessary to develop good negotiation skills.

Given that you are in charge of a program such as the MPA, do you think it is possible to create a transnational training for the public sector, not subordinate to the local characteristics?
It is not only possible, but necessary as well, exactly so as to take that mental leap I was talking about before, the one that allows you to switch focus from the temporary to the general, from the “here and now” problems to the future global challenges. Our MPA has two advantages from this point of view: one is the fact that it takes place in Milan, an increasingly more international and trend-setting city, indeed, further away than others from the traditional Italian administrative model; the other is that it is part of a business school, something rare for an MPA: this allows us to get to know and speak the language of both private and public, and, most of all, to get them talking among themselves. Which is a key requisite as we explained before.

Speaking of this, how important is training in making these new public managers?
It is a strategic factor, I’d say. Another element that we mustn’t underestimate is the acceleration of change in this context. Things are undoubtedly moving faster than before in the public sector, and this means that the public manager can’t stop. It is no longer possible to say “I have trained my staff”; you can only say “I have trained them for this context”, being aware that the context will be different in ten years. Once again, the point is: the public manager must be able to read the current context to try and imagine the future one. Training is exactly to provide these interpreting and forecasting instruments, to learn to pick up on the direction of change and manage them rather than being subjected to them. Going back to the migrants issue: today the public opinion and the public administration itself is considering it an “emergency”; but emergencies can become a problem or an opportunity, depending on how they are taken on. We can ask ourselves, for example, what skills do these people have and how can they be inserted in the job market? What is their spending capacity, which is often ignored or underestimated? Or their ability to save up? Well, public managers must ask themselves all of these questions and must give some answers for the present and other, different ones, for the future.
Being able to switch your point of view – geographical, cultural, operational: this is the great challenge. And training can do a lot. To be clear, it is not an easy job, but it is the most important thing public managers can do for their own professional future and probably the most valuable investment for the whole public sector. 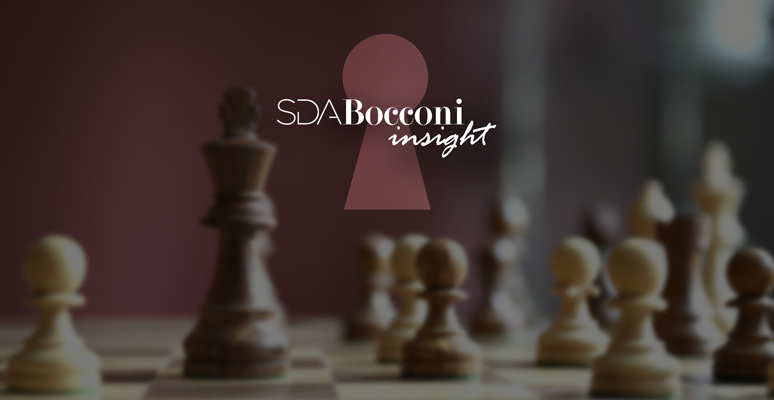